Today, I’m so excited to share a guest post with you from my friend, Terri!  One day, I mentioned to her that I thought she should write a blog (she’s a teacher, mom, excellent cook, and has tons of great ideas)!  She wasn’t quite sure she was ready to do that though, so I asked her if she would be willing to share here.  Our current transportation theme is right up her alley…

I love to read The Amazing Mess and to see what Stacie is up to with her girls. She is inspiring! I have a drawer dedicated to craft supplies, where everything from scissors and glue to paints and ribbons are available at all times. I have books and links and files…and my son couldn’t really care less.
Yes, I have boys.

As a girl myself, I’ve had to adjust my expectations about how I will teach and learn with my four-year-old son. As he has grown, I’ve realized that to capture his attention I need to start with what *he* loves, not with what I think is fun. And he loves…cars. He would be one happy boy if I would sit on the floor with him and just play cars.

I was doing just that recently when I decided to start making a line of cars that were all the same color. That caught Goober’s attention right away. We spent the next twenty minutes in deep discussion about whether that car was green or blue and what to do with the cars that were more than one color. As we worked he noticed other attributes of the cars: this one has the engine showing and that one has stripes. 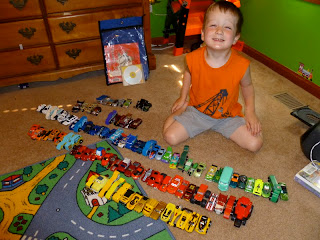 When the cars we all sorted, I asked him questions about the size of the groups. Which color had the most cars? The fewest? Are there more blue cars or orange cars? I encouraged him to estimate and then we counted to check. This was wonderful practice in counting past twenty and comparing groups of more than ten.

He wasn’t thinking about math, though, he just wanted to know about his cars! 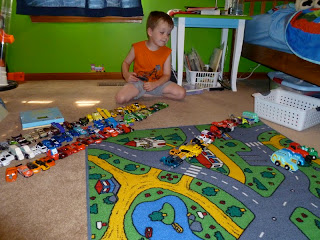 Next we decided to sort by type of vehicle. We made a group of cars, one of trucks, and one of big machines.

Again a good discussion followed. There was a problem, though. There were far too many cars to count one-by-one. This gave me the opportunity to introduce grouping and counting by tens. (Yes, we have a lot of cars!) 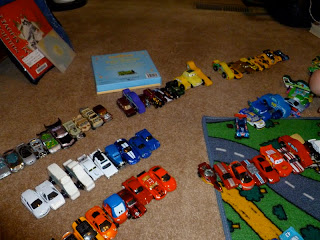 As we cleaned up the mess, I realized that cars could lend themselves to teaching graphing, probability, multiplication…the list goes on. If I use cars, he’ll never realize we’re “learning”.
Next week, Terri will share how she used cars to teach Goober the numerals from one to ten when he had just turned three!

Read More on this Topic: Transportation