Here is another great idea from my friend, Terri!

When Goober was about three years old, a friend of mine tried to include him in a game of War with her girls.  He wasn’t able to play and was very frustrated.  That’s when I realized that while he could count far past ten, he really wasn’t able to recognize all of the numerals.  I also knew he could use some additional practice with matching the numerals to the corresponding number of objects.  Thus, the parking space game was born. 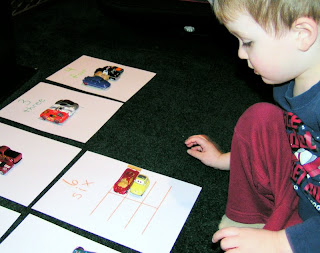 I knew Goober would be on board if I pulled out his cars, so I decided to create cards with the numeral, the number word, and the corresponding number of parking spaces.  I used heavy white card stock and they have held up well. 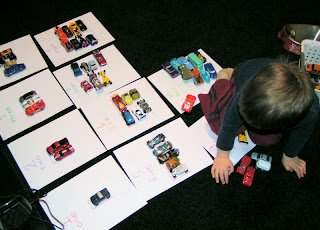 Goober was excited to gather a bunch of cars together and fill up all the parking spaces.  He very patiently counted every single car as he parked it, and we discussed the numeral and word for each card. 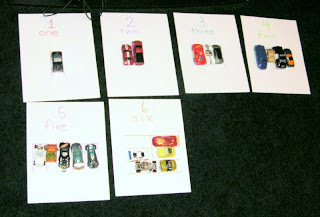 Lo and behold after playing the game just a few times, he was able to identify all of the numerals.  Looking at the cards now that he is older, I realize that I could pull them out and use them to work on his understanding of odd and even numbers.  We could try to count all the cars together or use two cards as addends for some addition practice. I could also cover the numerals so that he could practice reading the number words instead.

Again, cars prove to be the key to all kinds of amazing learning!

(You can also check out Terri’s post on utilizing cars to teach math!)

Read More on this Topic: Transportation